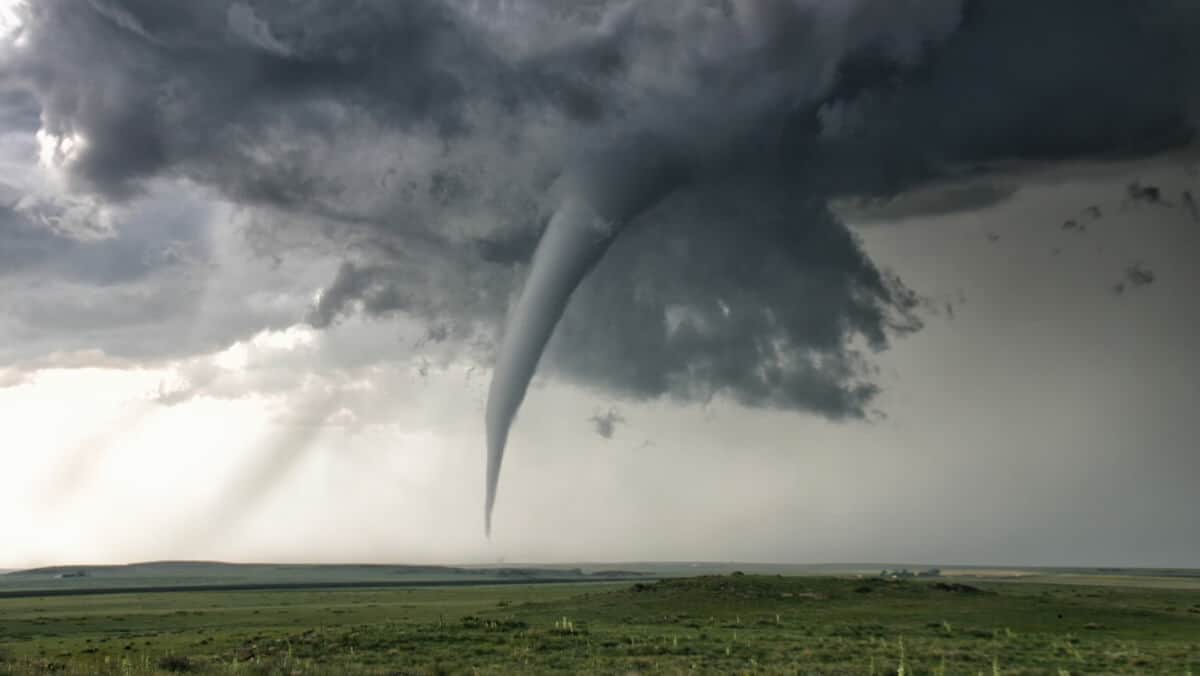 Recently, more than 30 tornadoes ripped across six US states, including Missouri, Tennessee, Kentucky and Mississippi. Spinning at over 94 km/h, the tornadoes tore across a combined total of 350km of land, destroying buildings and leaving at least 70 dead.

What caused these tornadoes to form?

How do tornadoes form?

Tornadoes are a spinning column of air that forms between storm clouds and the Earth’s surface. They usually last only a few minutes but can be extremely destructive.

Every tornado forms differently, but all are the product of a ‘parent’ storm called a supercell thunderstorm.

These storms have a spinning vortex of air in their centre that isn’t present in normal storms. As the supercell grows bigger, the vortex tilts and draws in warm air and moisture, spewing cold air downwards.

This creates an intense updraft of warmer, humid air, so the vortex swells up with water vapour and spins into a wild funnel – the first visible sign of a tornado.

The cold downdraft then fights against the warm updraft, forcing it into a smaller area and massively increasing the speed of rotation. If that downdraft exerts enough pressure, the wildly spinning tunnel of air is forced to touch the ground and a tornado is born.

The pressure from the cold downdraft acts a bit like our hands around dough. If we have a ball of dough and roll it back and forth, it will eventually become thin and long like a snake.

How do we detect tornadoes?

Tornados form very quickly – it can be just a matter of minutes – so the average person won’t know a tornado is forming until they see it.

Tornado prediction is even difficult for the experts. However, meteorologists can monitor the relative temperatures between the surface and the storm. But they can’t predict how strong the tornado will be, or exactly when and where it will form.

They can also detect forming tornadoes using Doppler radar, which detects the large, rotating updraft that contributes to the vortex. This updraft could be up to 10km in diameter – thankfully, the resulting tornado won’t be that large!

Dual-polarisation radar technology can also detect random shapes of debris caught in the winds of an already formed tornado, so they can follow the tornado remotely.

How big can a tornado get?

In a word: massive.

On 18 March 1925, a tornado that ripped through the US states of Missouri, Illinois and Indiana was the most extreme of its kind in recorded history. The infamous Tri-State Tornado lasted 3.5 hours and reached speeds of up to 117 km/h, as it travelled across a full 352km of land. These statistics make it the longest-lasting, fastest moving and furthest spanned tornado ever recorded. It was also the deadliest in US history, claiming the lives of 695 people.

The deadliest tornado in the world was the Daulatpur–Saturia tornado in Bangladesh, which killed more than 1300 people on 26 April 1989.

The United States also holds the record for the widest tornado – the El Reno, Oklahoma, tornado measured 4.2km across at its peak. This video explains it all.

Are tornadoes related to climate?

It is still unclear whether climate change influences the frequency of tornadoes, but severe storms are likely to become more common.

In addition, as the Earth warms the relative difference between the surface air temperature and the air near a storm may become more extreme, leading to more frequent tornadoes. On the other hand, it could also shift where tornadoes form, so they cover a wider area.

Originally published by Cosmos as How do tornadoes form?