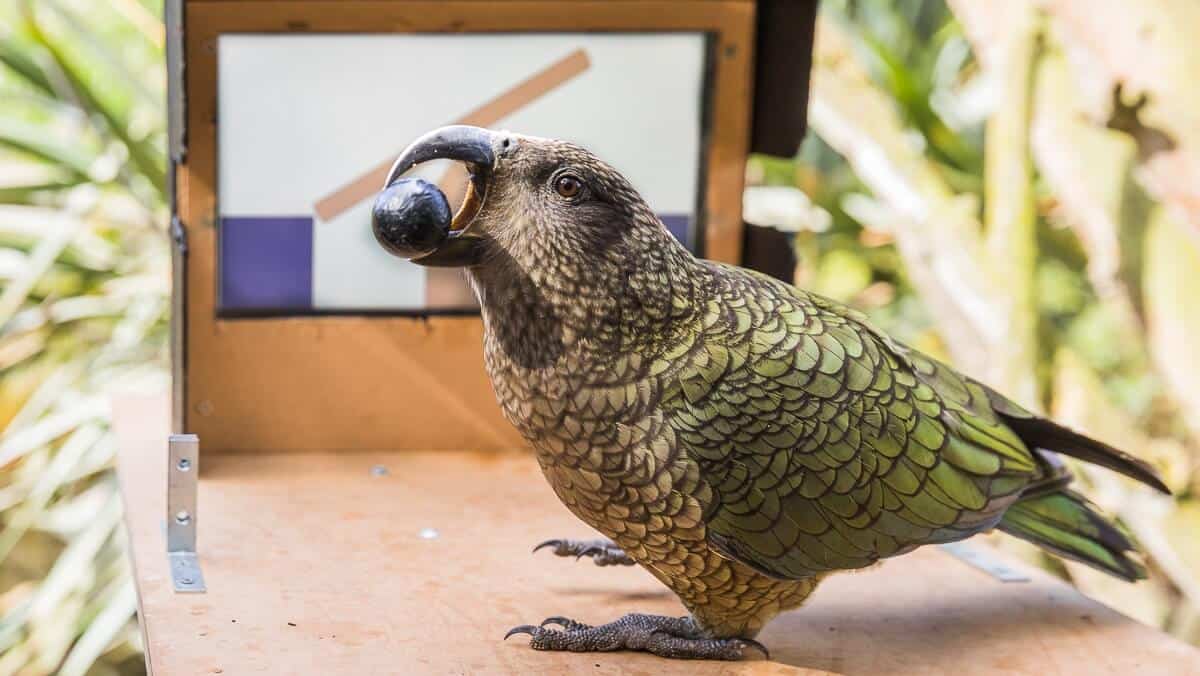 While some Cosmos writers think Ripper the swearing musk duck was the unequivocal highlight of 2021, it’s important to note that we ran dozens of other bird stories too. Here are some of our favourites.

An Australian study has set out to measure the number of birds worldwide, returning an estimate of 50 billion – although the uncertainty on that number is large.

The researchers used an eBird dataset totalling nearly a billion sightings to develop an algorithm that could estimate total population for each species recorded. In total, 9,700 species of bird were examined – 92% of all living recorded species. The remaining 8% of species were considered rare enough that they were unlikely to have an effect on the overall estimate.

Clever Kea (Nestor notabilis) can use touchscreens with their tongues and perceive the virtual world as real, according to New Zealand (Aotearoa) research, published in Biology Letters.

In another study, Bruce, a kea without a beak (pictured), has been able to use tools for self-care.

Bruce the kea is missing the top half of his beak from a suspected pest trap accident, but he has learned to carefully select and use pebbles to help preen his feathers.

3.     A glimpse of the night parrot in the Great Sandy Desert

This century, fewer than 30 people have seen the night parrot alive. The bird is notoriously difficult to spot, but a group of Martu rangers in northern Western Australia have just been able to catch another glimpse – and snap a photograph.

Read more here, or watch an interview with Marjorie Nanudie and Colin Yabarllar, two of the rangers who were on the trip, below.

4.     Even migratory birds can keep their cool

Migratory birds are specially adapted to tackle the remarkable tests of endurance involved in undertaking their long and arduous journeys. And now we know that one of these adaptations might resemble one of our own during the summer months – keeping it cool in lighter colours.

The Australian Acoustic Observatory (A2O) is a continental-scale acoustic sensor network, designed to collect data over five years from 90 sites across seven different Australian ecoregions. The A2O is futuristic and… well, kind of hard to explain.

“It’s not actually the traditional sort of scientific project where you say, ‘hey, we’ve got a question – let’s try and answer that question’,” says Professor David Watson, of Charles Sturt University, who’s one of the A2O’s five chief investigator managers.

Read more here, or watch the video below.

Males are prone to try anything to get lucky, and lyrebirds seem to have it clinched, according to study published in the journal Current Biology.

Scientists have made a surprise discovery that the wily songbirds use their extraordinary skills to mimic a nearby threat and trick females into hanging around for sex.

7.     More to learn about evolution from Galápagos finches

Finches on the Galápagos Islands have become famous because of the subtle variations in species between islands. These variations represent different selective pressures, showing the birds evolved in response to the environment.

The Galápagos finches, also known as Darwin’s finches, have been scrutinised since the 19th century, but according to a team of researchers from Flinders University, there are still plenty of things to find out.

Bird enthusiasts in South Australia’s Coorong region have just spotted an orange-bellied parrot, and heard another one. This is the first time there has been a positive sighting of the critically endangered bird in the area since 2013 – proof that they still retain the migratory instincts to travel up the coast from Victoria after migrating across the Bass Strait.

This follows news last month that a cohort of captive-born orange-bellied parrots (Neophema chrysogaster) was released on the Victorian coast, bolstering the hopes of conservation efforts.

New Zealand’s use of toxic aerial baits to rid the islands of invasive mammal predators has attracted claims that forests “fall silent”, with birdsong declines after each operation.

Listening to the forests, scientists have found little evidence for the claims, according to a study published in the New Zealand Journal of Ecology. At a species level, however, chaffinches (Fringilla coelebs) and tomtits (Petroica macrocephala) did make less noise following single bait applications, suggesting they may have been exposed to the poison.

Curated content from the editorial staff at Cosmos Magazine.