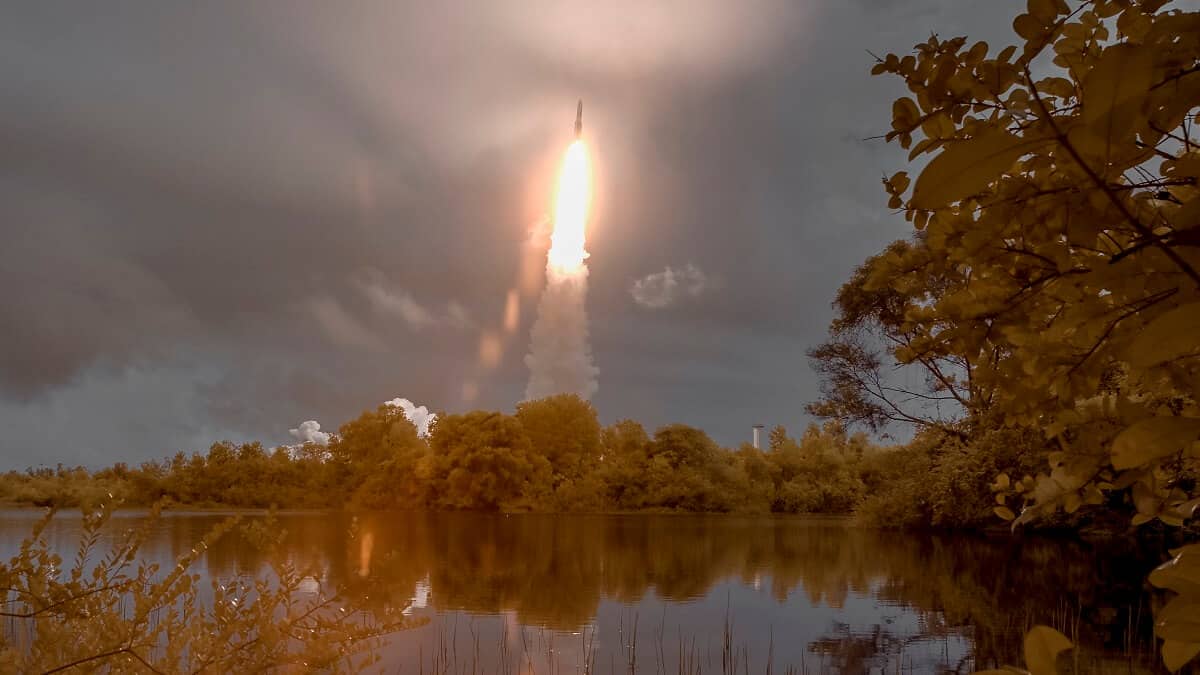 The new James Webb Space Telescope passed another major milestone over the weekend, deploying its primary mirror – the crown jewel of this long-awaited observatory.

The mirror is a whopping 6.5 metres in diameter, bigger than any mirror previously launched into space. (The Hubble Space Telescope’s primary mirror is a mere 2.4m across.) The size heightens the sensitivity of the telescope – the larger the mirror area collecting light, the more details it can capture of a star or galaxy.

The mirror is made up of strong, light hexagonal segments tessellated together. For launch, they were folded up into two “wings” to allow for the telescope to fit into the launch vehicle. But now they have successfully stretched out again.

This follows the recent deployment of the secondary mirror: a small, circular mirror which plays a vital role in reflecting light from the primary mirror to the instruments.

Both of these mirrors are covered in a microscopically thin layer of gold. This isn’t just to look fancy – it actually optimises them for reflecting infrared light.

The most exciting thing about the James Webb Space Telescope (JWST) is its promise to revolutionise infrared astronomy. With a massive mirror and the ability to see light at the infrared part of the spectrum, it can peer back billions of years through history to capture the faint, red-shifted light from the very beginning of the universe.

It will be able to watch the first stars and galaxies flicker on, probing the mysterious processes that took the universe from its dark ages and thrust us into the era of light.

Astronomers have had burning questions about this early era of the universe for decades – for example, what were those first stars like? How did magnetism and turbulence play a role in triggering the first stars to be born? How did black holes first form, start to grow and become the hearts of galaxies?

JWST has been purposefully designed to answer these questions and more.

“Through deep observations, James Webb will reveal the very first galaxies formed in the infant universe and how those galaxies evolved across 13 billion years of cosmic time,” explains Lisa Kewley, director of ASTRO 3D from the Australian National University.

“We will obtain an unprecedented picture of how galaxies like our Milky Way formed and evolved. We will measure how the elements responsible for life: oxygen, carbon, and nitrogen, formed and evolved across 13 billion years of cosmic time. James Webb will also reveal what elements are in the atmospheres around extrasolar planets.

“The big questions that James Webb aims to answer are all about our origins and our place in the universe: Are we unique? Is our Earth unique? Is the Milky Way unique? What are our origins?”

The very first chapter in the universe’s history has previously been hard to study because the only way we are able to learn about it is through light. As the universe expands, the light of these first stars has been stretched as it travels towards us, shifting it from more energetic waves of ultraviolet or visible light into the red end of the electromagnetic spectrum.

Unfortunately for us, this infrared light is the same thing of heat, and we have plenty of that on Earth, drowning out the fainter signals of galaxies far, far away.

But by launching a massive infrared-sensitive telescope into the freezing expanses of space, we can capture the flickers of these ancient stars.

“In the visible to mid-infrared wavelength range, JWST’s diameter is unprecedented,” Leethochawalit says. “It will detect the faintest and furthest source known to mankind.”

The Hubble Space Telescope has been orbiting the planet for more than 30 years, but since it’s not optimised to study the universe in infrared, it hasn’t been able to answer all of the questions that JWST will tackle. In fact, results from Hubble inspired the design of the JWST.

Hubble discovered that stars, galaxies and supermassive black holes were around far earlier in the universe’s history than we’d thought, and have evolved dramatically through time. We’ve also learnt about the role that dark matter and dark energy play in the universe’s evolution, and we’ve discovered thousands of exoplanets orbiting stars. JWST will tell us more about each of these things.

The bigger mirror of JWST – plus its specific infrared capability and the greater distance from the heat of Earth – means that this new telescope will take infrared astronomy above and beyond what Hubble was able to do.

So what’s next on the journey?

Unlike Hubble, JWST won’t be orbiting around the Earth – in fact, it’s still en route to its final workplace, the second Lagrange point (L2).

Here, at this particular point about 1.5 million kilometres from Earth, the telescope will actually orbit the Sun – but while always staying in line with the Earth. It will basically keep up with our planet as it orbits, held in place by the gravity of both Earth and the Sun, so it will need relatively little rocket fuel.

This also makes it easy for its sunshield – which was also successfully deployed last week – to always protect the delicate mirror and instruments from the heat from both the Earth and Sun. The telescope has to operate at about -225°C, so this protective configuration is essential.

It will take a total of 30 days for JWST to complete its journey to L2, so there are still a couple of weeks to go before it is inserted into its orbit.

While this is happening, the mirrors are continuing to prepare themselves. They have already begun the necessary cooldown process in the shade of the sunshield, but it will take several weeks for them to reach stable operating temperatures. It’s a finely controlled process, with electric heater strips managing the cooling rate so everything shrinks carefully.

As everything cools down, each individual mirror segment will be carefully moved out of launch configuration and into position.

All the pieces need to be perfectly aligned in order to correctly focus on far off galaxies. This job is done by tiny mechanical motors called actuators attached to the back of each mirror piece, which can shift the pieces until they together act as one large coherent piece, producing sharp images.

“Aligning the primary mirror segments as though they are a single large mirror means each mirror is aligned to 1/10,000th the thickness of a human hair,” explains Lee Feinberg, Webb Optical Telescope Element Manager at NASA’s Goddard Space Flight Center, in Maryland. “What’s even more amazing is that the engineers and scientists working on the Webb telescope literally had to invent how to do this.”

Then, once JWST is in orbit and the mirror is ready, the scientific instruments will come online.

But it’ll still take a full extra five months before JWST turns its eye to the sky for the very first time, as it will take time for the optics systems to be properly aligned and the instruments to be meticulously calibrated.

“JWST is a remarkable feat of engineering, one of the most complex instruments ever built, and will demonstrate our capacity to operate new space technologies at more than 1.5 million km from the Earth,” says Simon Driver from the International Centre for Radio Astronomy Research (ICRAR) and the University of Western Australia.

“Australia will play a critical role in tracking the Ariane 5 launch vehicle as it enters space, and later the routine downloading of the science data eight hours a day from NASA’s deep-space tracking station at Tidbinbilla, ACT.”

Looking to the future

Astronomers around the world are waiting with bated breath for JWST to begin its science program in mid 2022.

“It’s been like waiting for Christmas for 20 years,” says Daniel from Monash University. “The first round of observations will be particularly special for our group at Monash as we have time awarded to image a baby planet we discovered in 2018. We’re hoping that a picture of an infant planet orbiting a young sun will prove one of the spectacular early results from James Webb.”

But while some people have been waiting for decades, for younger scientists this will mark the beginning of exciting careers.

“During the past few years as a young researcher, I have been learning about many of the current questions and challenges in astrophysics,” says Juan Manuel Espejo, PhD candidate at the Centre for Astrophysics and Supercomputing at Swinburne University of Technology.

“What I have found as a common theme in almost every one of them is that JWST will play a crucial role in proving answers and alleviating our curiosity for understanding the cosmos.”

Claudio Lagos Urbina, from ASTRO 3D, adds: “I am so looking forward to this – as a computational astrophysicist, we have been making predictions for what JWST will see for some years and it is now the time to test these predictions and hopefully turn those new observations into a transformational understanding of how galaxies form, and especially, how our home, the Milky Way, came to be.

“We are truly expecting a breakthrough in our capabilities of understanding the formation of the Universe.”

Originally published by Cosmos as Why is the James Webb Space Telescope such a big deal?